Last spring, my boyfriend Harrison and I moved to Downtown Brooklyn, AKA to “DoBro,” as it was so terribly coined by real estate agents.  One of the most exciting things about the move? The availability of quality pizza in the surrounding neighborhoods. And, one by one, we’re in the process of doing a pizza tasting tour — Pizza Superstar was next on our list!

(See my review of Table 87 here and Sottocasa, other DoBro spots.) 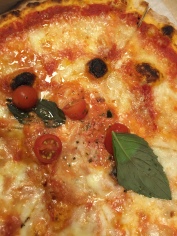 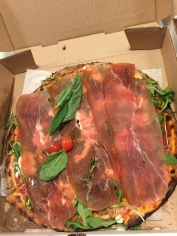 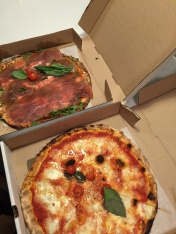 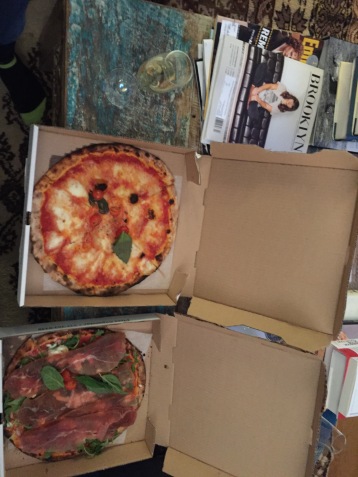 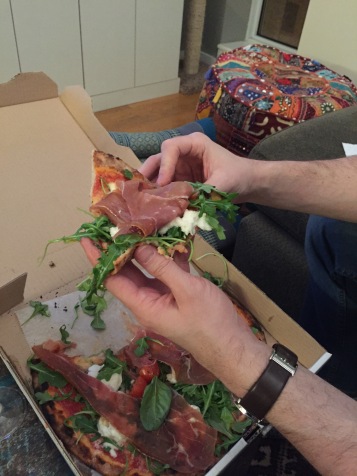 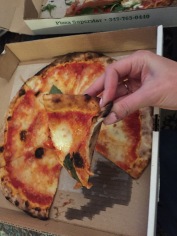 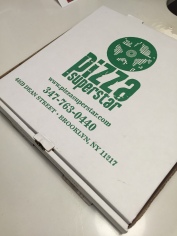 Last week, we ordered two pies, a classic margherita and a custom arugula, buffalo mozzarella, and prosciutto pizza.Once we opened the boxes, we could see that Pizza Superstar wasn’t messing around.  There was a great ratio of melted cheese to sauce on the margherita.  The crust looked perfectly charred.  Visually, the prosciutto pizza pie could have been better though.  The wide slices of prosciutto fully covering the pizza didn’t leave our mouths watering, but once we took a bite, the flavor combinations more than made up for any aesthetic deficiencies.

The deliciously tender prosciutto mixed beautifully with the fresh arugula and mozzarella , especially organized in layers (prosciutto, mozzarella, arugula, and cheese/sauce from top to bottom).  Both pies had great flavors that could compete with some of the better Neapolitan pizzas in NYC. The fresh tomatoes and basil were a particularly noteworthy touch.

Despite the excellent flavors, Pizza Superstar loses a lot of points for its thin and saggy crust.  As soon as we picked up the first slice, toppings started falling off.  Even employing the “New York pizza fold” was difficult without using two hands.  Things got even more difficult on the toppings-heavy pie that we created.  Harrison practically had to cradle the entire slice just to keep the toppings afloat.

We debated whether the crust situation was a result of getting delivery, but decided that the thinness of the crust and an oven that probably had too low of a temperature were ultimately the culprits.  Its for these reasons that we had to give Pizza Superstar only three slices.