This Week: The Best Pizza Box Ever… and the Key to Travel Instas? #Pizza

Phil Duncan REALLY knows how to improve a standard travel Instagram — pizza in every location you go. Follow him on instagram for #pizza updates across six continents.

And speaking of internet sensations, the pizza rat is back in this pizza snow rat video. At least he survived the 30+ inches of snow that hit NYC last week and fared better than this rat that died after making its Broadway debut. (RIP!)

When Chet Faker was locked indoors last week because of Snowstorm Jonas, he wrote on twitter: “Bit a snow and ya boy cant get no pizza.” Wallowing in sadness, he wrote this song:

Keep Pizza Hut top of mind when it comes to delivery. They’ve rolled out yet another of its pizza crust innovations: Garlic Knot Crust. No need to order apps with this pie! 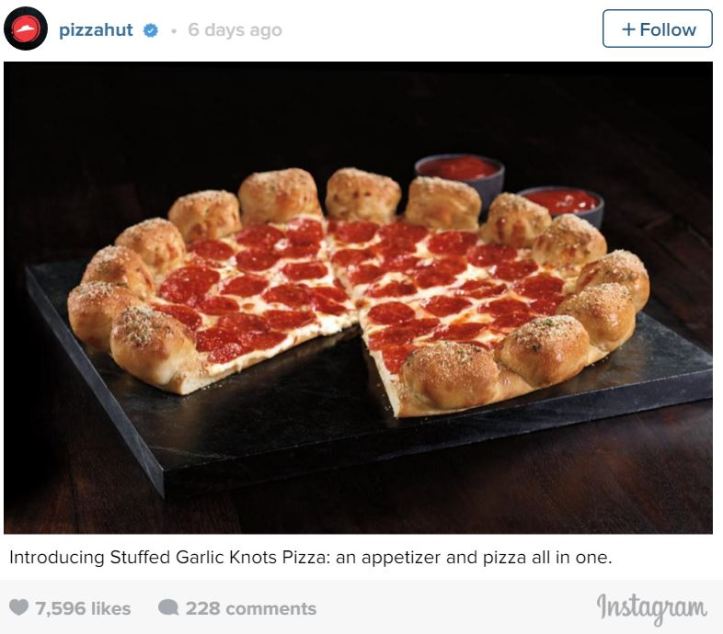 If only we Americans could get a piece of the even zanier British version: Hash Brown Stuff Crust pizza.

And just in case you can’t wait for Pizza Hut to deliver a garlic knot crust pizza, you can make a pizza in a cup in just 2 minutes. We tried it… it’s not bad!

Plays can occasionally be boring.  Plays where they pass out free pizza from Artichoke Basille?  Now that’s a show we’d like to attend.

The New York Times was out with a great story about Pizza Veterano, a pizza shop in Kiev, Ukraine that only hires war vets.  According to the article, “The pizzas are made in the Ukrainian style, heaped with bacon and onions.”  Is there anything that doesn’t get better with bacon? One patron had an opinion about it: “‘We are Ukrainians,’ Mr. Ostaltsev, a machine-gunner in the army, said of the bacon overkill on most toppings. ‘The more the better'”

Is this the best pizza box ever or what? While only at QuikTrip right now, we’re hoping this gets rolled out across the country. Makes sharing easy… if you’re into that.

While we’ve tried our fair share of slices in the city, Colin Atrophy Hagendorf, through his blog Slice Harvester, has tried almost every slice in Manhattan.  According to his new book, the best slice in the city is Pizza Suprema outside of MSG.  We’ve never heard of it, but it’s definitely going on our list to be reviewed, stat.

Do you know what your favorite pizza says about your dating life? Here’s a list to figure it all out.

Thank you Imponent Pizza for this new pizza fact from your blog: “Eating pizza once a week can reduce your risk of esophageal cancer by up to 59%”  We’re slightly curious about the scientific credibility of the statement, but we’ll choose to ignore the “facts” and start upping our pizza intake.

Another pizza-diet weight loss success: This guy lost over 100 lbs while eating one margherita pie a day.  We think the kickboxing might have helped too.

Follow us for more pizza news updates next week!