When I read about Sottocasa being called one of the most underrated pizza spots in New York it added to my budding intrigue, especially since it was on a list with South Brooklyn Pizza which I particularly love, so I made it a point to check it out.

And what better companion would there be than a fellow pizza blogger? Jason Feirman, of the blog I Dream of Pizza, and I had been e-introduced in light of his NYC pizza run and it only made sense to go on a pizza eating expedition together and to a place neither of us had covered so I suggested we try Sottocasa. 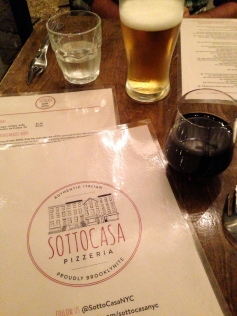 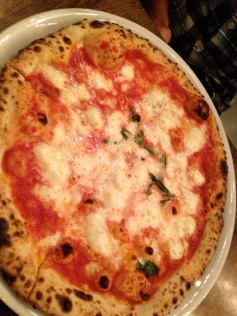 Upon arriving, it was clear the restaurant was far from busy — a relief for a hungry pair of pizza lovers. We were seated in the covered outdoor space which was an expansion since the launch of the pizzeria in 2011. The owner, Luca Arrigoni, came to NYC from Milan and previously worked under Neopolitan pizza master Roberto Caporuscio of Kestè, to learn the craft. The idea behind Sottocasa is to not only serve authentic Italian pizza but to make you feel at home as the name itself implies. Sotto is Italian for under, and casa means home, but it’s “less about a physical location and more about a feeling,” the site explains.

Jason and I had to take a break from talking about pizza just to find time to order! We settled on a classic margherita and a tartufata with mozzarella, home-made truffle spread, mushrooms, prosciutto di parma and basil. While I can recognize that Sottocasa is trying to replicate the classic Neapolitan style as served at Kestè, I was a bit disappointed by the crust which was not as thin as I would have enjoyed and a bit doughy. A little bit longer in the oven may have helped or pressing it a bit more to distribute the dough could have remedied the issue but, regardless, I enjoyed the setting which was more laid back and escapist than some other Manhattan pizzerias that seat couples on top of one another. The pizzas are also reasonably priced at $11 for a margherita and $20 for a more elaborately topped pie all cooked in their wood burning oven. Oddly though, the pizzas were cut into 4 slices rather than 6 making it hard for sharing and awkwardly large to hold. The toppings stayed on just fine (as tested by Jason himself) but they were larger than one usually feels comfortable eating. Especially if you want to try a few slices of multiple pies if you’re sharing with a group.

By far the highlight on this pizza trip was in recognizing our shared appreciation for pizza and that it can bring people together. Whether you’re comparing notes on favorite places, sharing stories of not-so-good (or as Jason says, “fine”) pizza, remarking about how amazing it is you’ve been to the same establishments despite them being no where near home (like Jerlando’s in Watkins Glen…) or if you’re learning unknown facts about Pizza Hut not allowing you to take photos of their pizza in raw form, two pizza lovers will always have something to talk about.