I woke up to discover a blinding white layer of snow hanging on tree branches and feet of snow bordering sidewalk pathways only wide enough for one to pass. The streets were paved but the snow piles reached the knees of passers by. The only thing that forced me to get out of bed was the thought that maybe, just maybe, work would send out an email announcing the office was closed. But no. My dreams of sledding and snowballs and well-earned hot chocolate would have to be postponed. 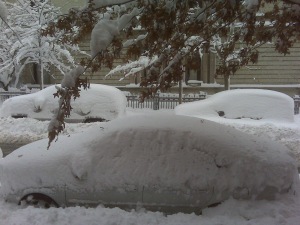 Arriving at the office slightly late went unnoticed, but as I settled in my boss approached me with an important assignment. “I’d like you to order six pizzas for the staff.” My eyes lit up and I realized, this is the best non-snow day ever. Six pizzas ranging from veggie lovers, to bianca, spinach, pepperoni and caprese. Ah, the possibilities. I called in the order, and from then on, the time had never gone so slowly. I watched the clock from 11 until 12:30 when the pizza was expected to arrive. Ten minutes past the scheduled arrival time, 12 minutes past, 20 minutes past… finally I called and they said they were on their way. The office grew antsy once the initial email went out :

The buzz was going around the office and people were even emailing about their excitement. “Awwwwesome” One email from a staff member read. Time was ticking and I knew the pizza would arrive at any second.

Finally, the time had come. It was here. Pizza. In my office. At my desk. On my Kleenex napkin (who knew there was such a paper plate shortage at Meredith?)

The pizza itself was rather average. Slightly cold and generally unmemorable. But the experience behind it is what made it exemplary.

I wish every day we could have celebratory “non-snow day” pizza lunches.